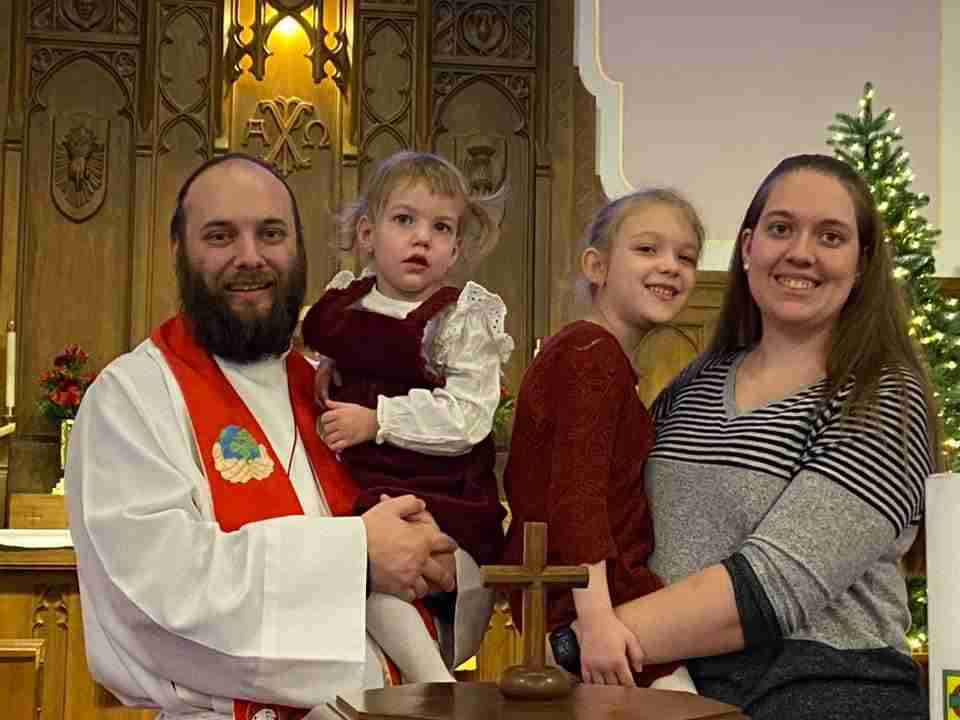 Zion Lutheran Church in Atlantic has a new pastor! Kyle McBee was born and raised in Midwest City Oklahoma, a suburb of Oklahoma City. After graduating high school in 2004, Kyle worked odd jobs until he joined the US Navy in 2007. After serving overseas at various commands for three years, Kyle attended Concordia University Chicago where he majored in Theology.

While attending Concordia University, Kyle met his wife Cayleigh, who grew up in Joliet Illinois, just an hour outside of Chicago. Prior to both Kyle and Cayleigh meeting in college, they both had served as counselors at various summer camps prior and were trained in evangelism through the organization Ongoing Ambassadors for Christ (O.A.F.C.).

There was even a national O.A.F.C. event they both attended where a large group picture was taken. Both Cayleigh and Kyle are in the same photo, but they would not actually meet one another until several years later at Concordia University.

Cayleigh also attended Concordia, majoring in early childhood education. Both Cayleigh and Kyle graduated from Concordia University in May of 2013, got married the following month, and then moved to Fort Wayne Indiana. There Kyle attended Concordia Theological Seminary while Cayleigh began working as a Lutheran school teacher at Emmaus Lutheran School.

In July of 2014, Kyle and Cayleigh had their first daughter Emma. After three years of classroom study and a year of vicarage (which is comparable to an internship for one studying to be a pastor) Kyle graduated from seminary in May of 2017, and was called to Humboldt Iowa where he served both Zion Lutheran Church in Humboldt and Trinity Lutheran Church in Fort Dodge as associate pastor.

Shortly after arriving in Humboldt, their second daughter Ellie (Eleanor) was born. Both Emma and Ellie are very social and outgoing for their age, and enjoy coloring, playing with dolls, building with Legos, and loving on their dog Matics.

Kyle, Cayleigh, Emma and Ellie are excited to be a part of Zion Lutheran Church and look forward to being involved in the Atlantic community and all the new adventures that await them here.